In Patti Smith’s magnificent version of Van Morrison’s 1964 single Gloria: In Excelsis Deo Smith lays bare the roiling temerity and sense of self determination that characterise her career as singer, poet, writer and confessor. The line Van Morrison never sung in his own version – “Jesus died for somebody’s sins but not mine” signals a raw disavowal of religion, more particularly Christianity but also warns powerfully that Smith takes responsibility for her own actions thank-you very much.

Even in Titian’s masterpiece La Gloria in the Museo Nacional del Prado, Madrid, the depiction of twin narratives depicting so-called Arian heresy at least raises contention as to Jesus’s place in the trinity and then by implication in his capacity to bestow god’s forgiveness.

In Aida Tomescu’s grand new exhibition A Long Line of Sand she offers neither policy nor prophecy about sinfulness or forgiveness, no proselytising about belief and religion but what she does demonstrate is a profound belief in the communicative power of painting and by association literature, something Patti Smith would certainly assent to – and its capacity to grip our soul, to breathe life into existence and even to affirm our essential actions.

There is such force in Tomescu’s painting, an energy and endurance that I am happy to make analogous with a performance of Patti Smith’s. Neither Smith’s concerts nor Tomescu’s paintings are constrained by politeness or orthodoxy. Their first obligation it seems is to move you, not just emotionally but intellectually, perhaps even spiritually, however theirs is an otherworldliness rooted in the corporeal, in material and in the force of physical and intellectual effort.

The imposing triptych itself, A Long Line of Sand III demonstrates Tomescu at her most powerful and poetic. Like Patti Smith, there is a raspy, coercive intensity in its delivery as paint and words, gesture and syntax are given a new structural liberty  – and all the while there is a deeper rhythm and cadence that gives the painting an electrifying consonance. At first sight there is something of Phil Spector’s “Wall of Sound” about

this panoramic painting. It appears to be coming at you from every direction, reverberation and echo flooding our senses. However within moments  we begin to see and feel the distinctiveness of certain passages and the pace we anticipated alters as the painting opens to a new unexpected identity. Tomescu’s paintings can startle, even unnerve us in this way. They overturn assumptions about time and speed, upend our beliefs about the linear progress of modernity.

It is the unbridled potency and commitment in Tomescu’s approach to painting that reminds me of the excitement I and many others felt when in the late 1970s punk music challenged the mannerism of stadium rock.

It is not drawing too long a bow to see Aida Tomescu’s work through this lens and whilst it may be the strains of Shostakovich and Schoenberg that she chooses to paint with rather than Iggy Pop or Patti Smith, there is much about Tomescu’s temerity and rigour, her resistance of lyricism and easy melody that invests her paintings with the kind of contention that marks turning points not stasis. Though it is the case that once they find resolution these paintings possess a remarkable composure and tranquillity.

These new paintings more than ever can be seen as a celebration of considered insurgency, the kind of foundational dissent that Cezanne invoked… and for that matter Titian solicited. In these new works Tomescu has greatly increased the scale of her territory so that we can see her form and composition expand appropriately – across and into a field that refutes the pictorial in favour of a material and gestural inquiry that has new volume and density, greater veracity and candour.

In many of the new works there are significant areas of the painting where the linen is only stained with colour, sometimes even left raw. The spatial implications of  this openness are expressive in itself, but the manner in which these areas might appear to be left to their own devices reminds us just how consequential each mark is. Much-like late Cezanne’s so-called “unfinished” paintings these decisions Tomescu makes about placement and completion signal purpose and resolution not indecision. The exposed linen ground in Cezanne or Titian reveal a more complex construction, one where the transitions required to establish form are necessarily more complex yet yield greater depth.

There is so much about a work by Aida Tomescu that upholds the very act and material of painting – however what feels freshly evident in the paintings that form A Long Line of Sand is her indispensable commitment to drawing. Visiting her painting studio, as I am privileged to regularly do, I am reminded time and again that she has a constitutional promise to drawing and that it has a centrality to her thinking and processing. As foundational as it is to her, one never feels that it is preparatory. Rather drawing may come after the fact and exists as a constant and welcome intrusion, encouraging excavation, cutting and adjustment. Titian said that “it is not bright colours but good drawing that makes figures beautiful” and though Tomescu’s drawing is not in the service of the figure, nor beauty for that matter, it is in the service of form and thus the principle remains so. Drawing by its very nature more easily invites adjustment. And as Patti Smith observed “I think I’m constantly in a state of adjustment” and I think that is the happy case for Aida Tomescu. 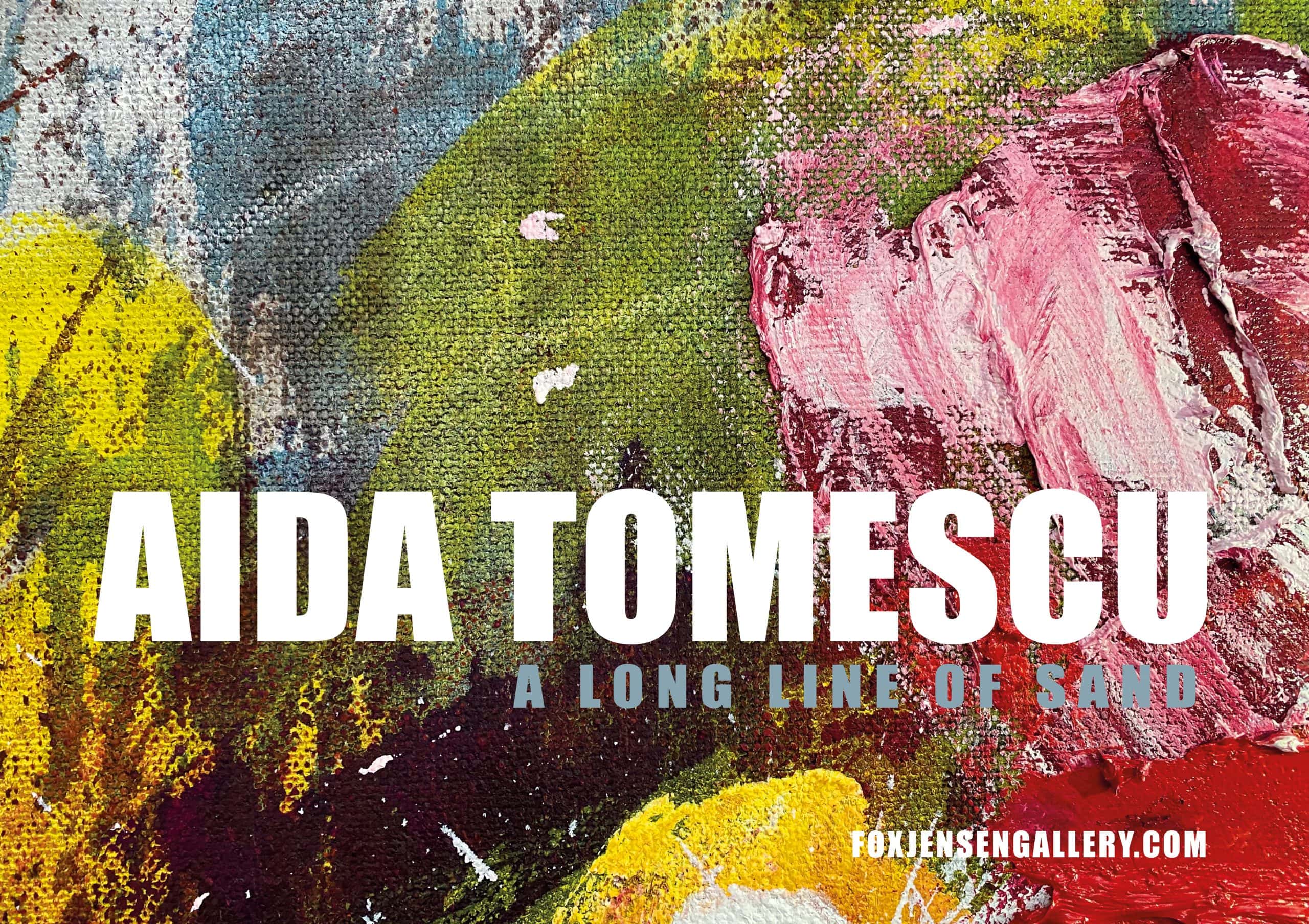 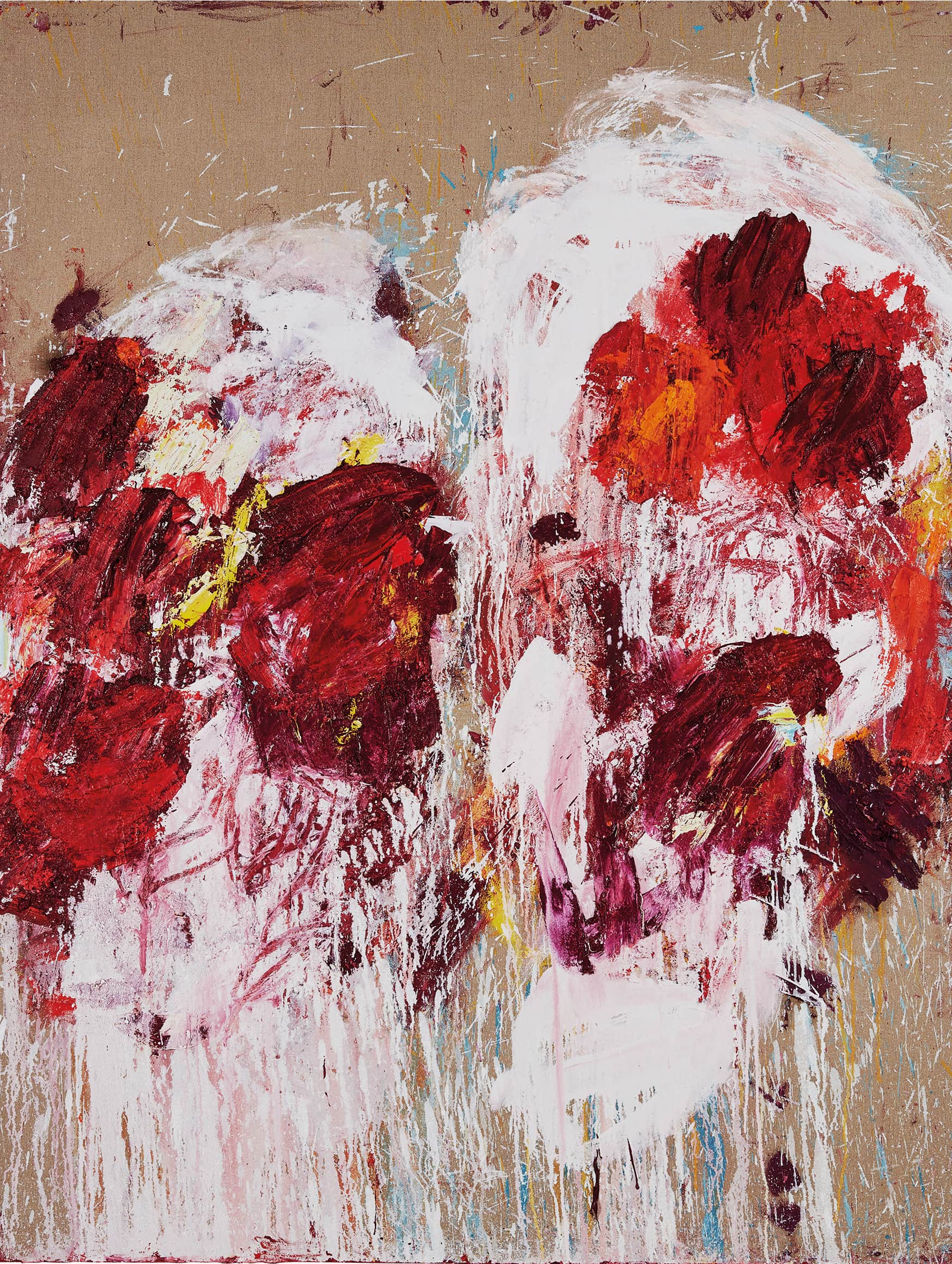 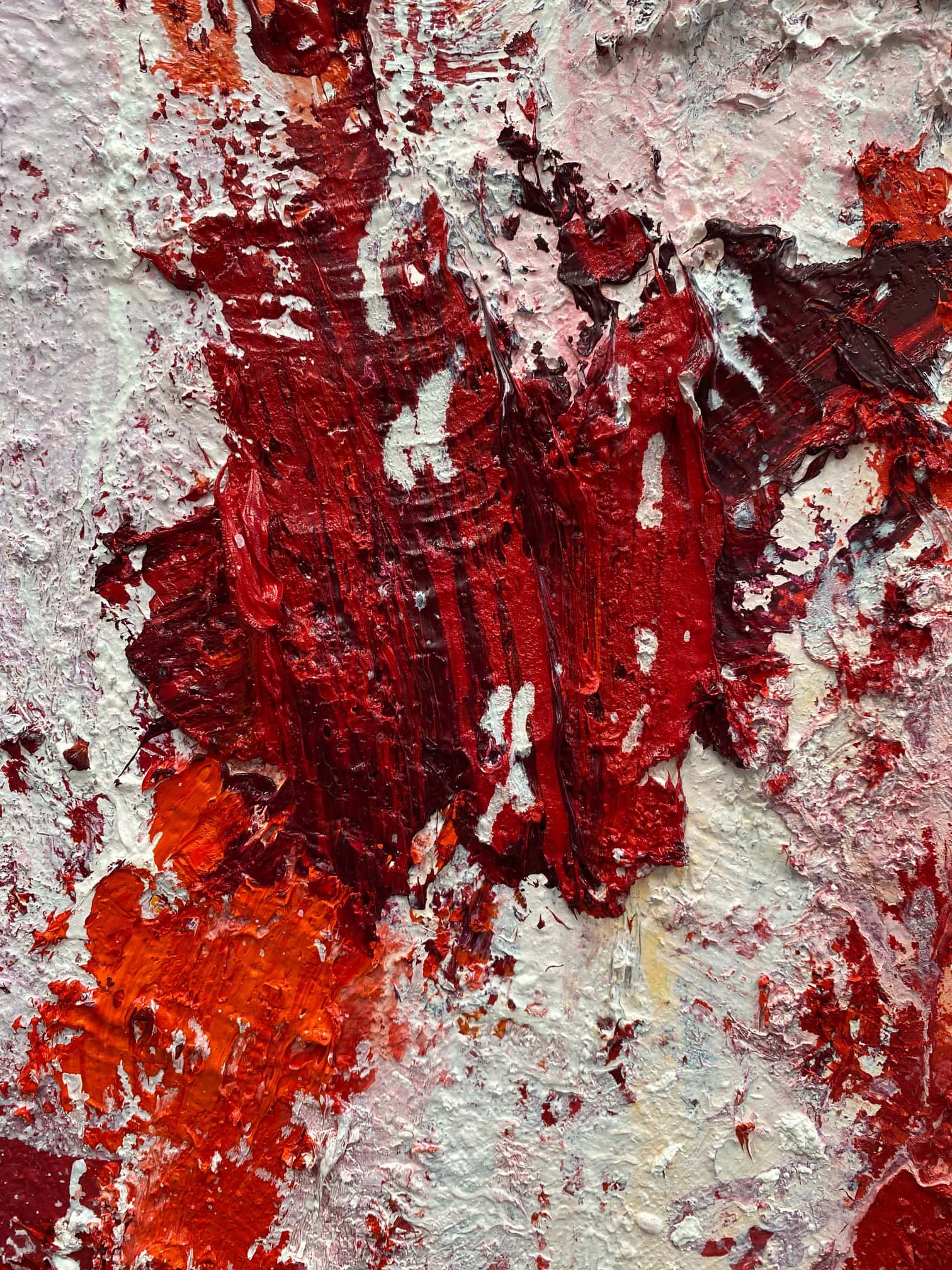 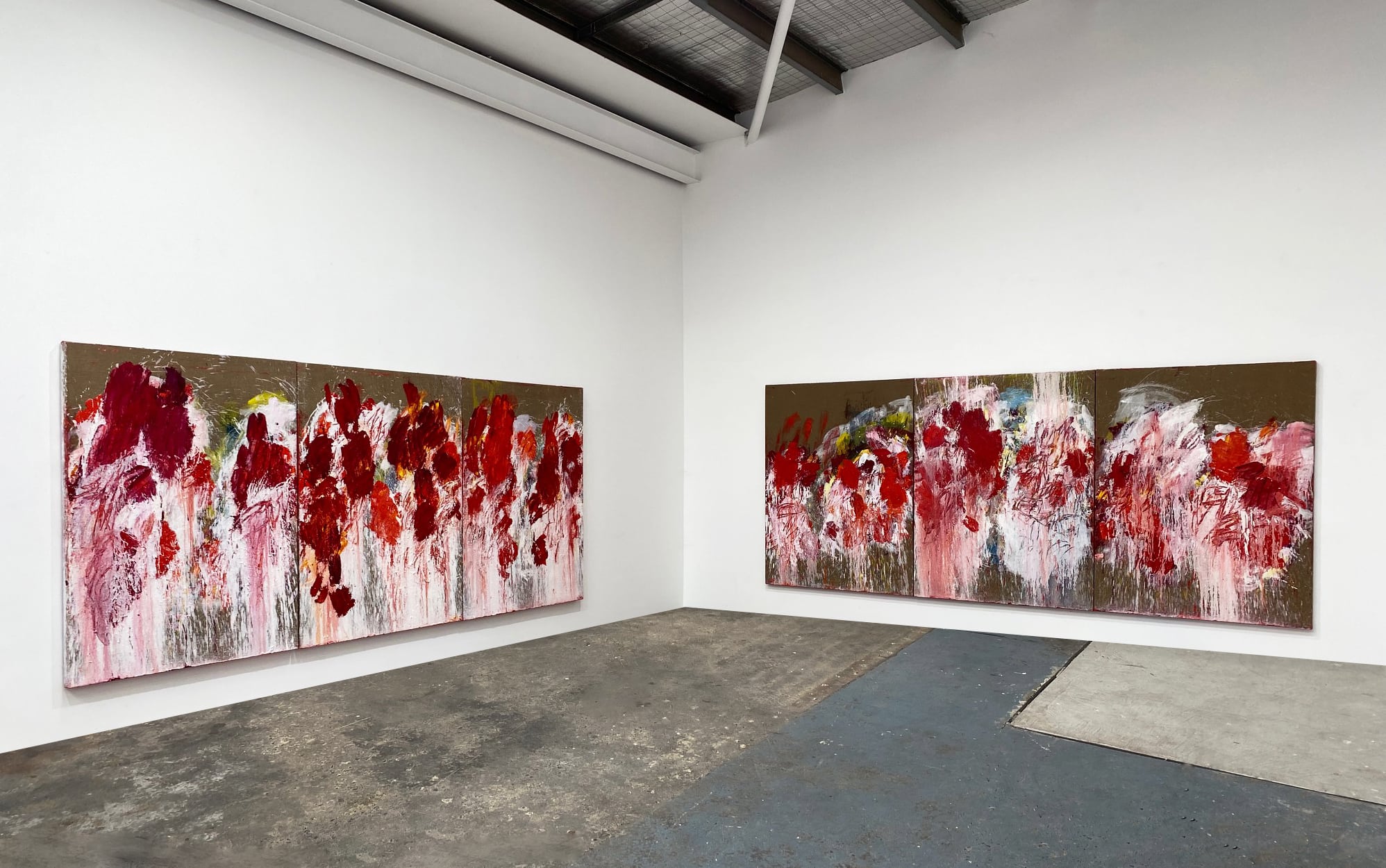 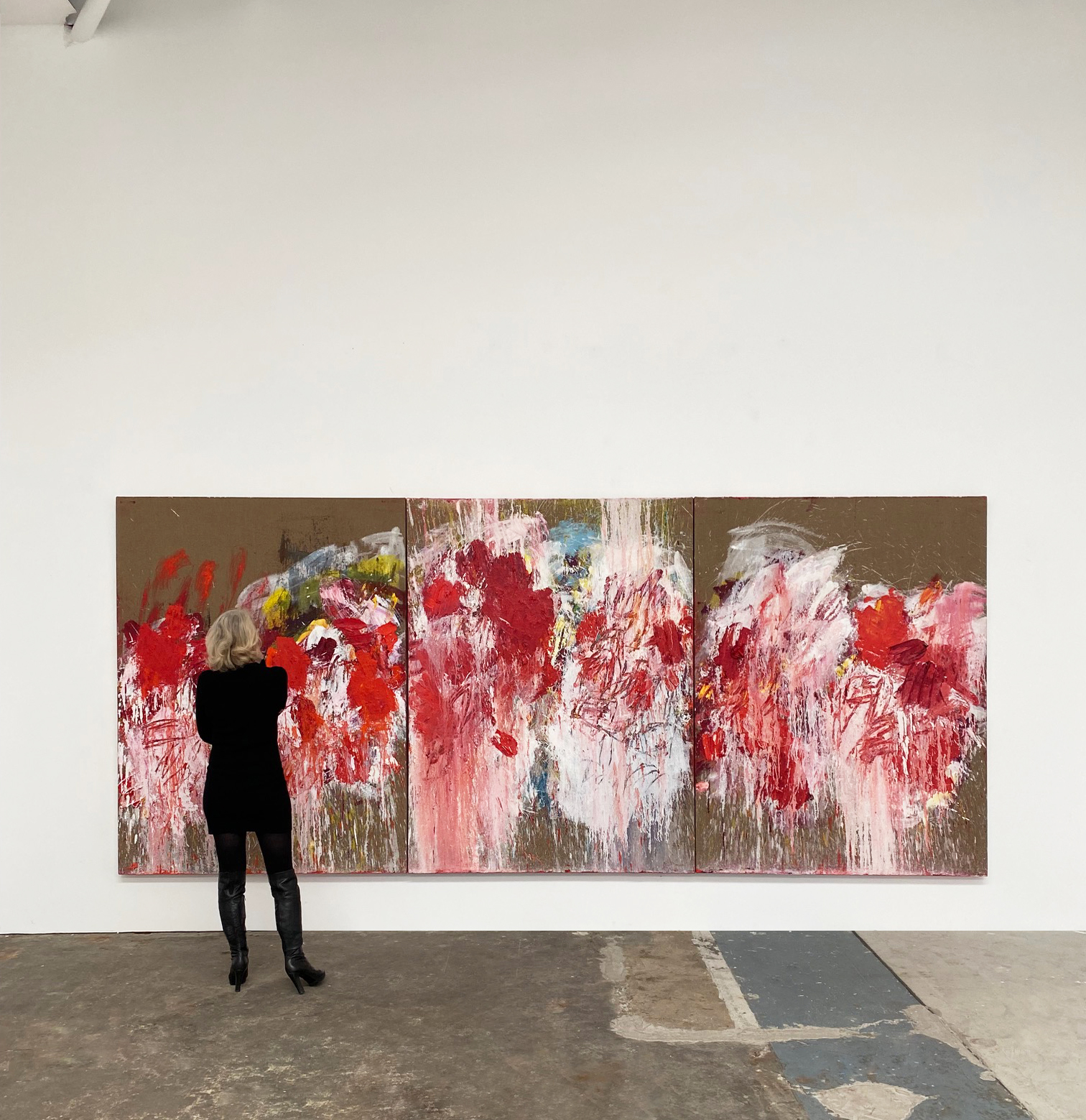 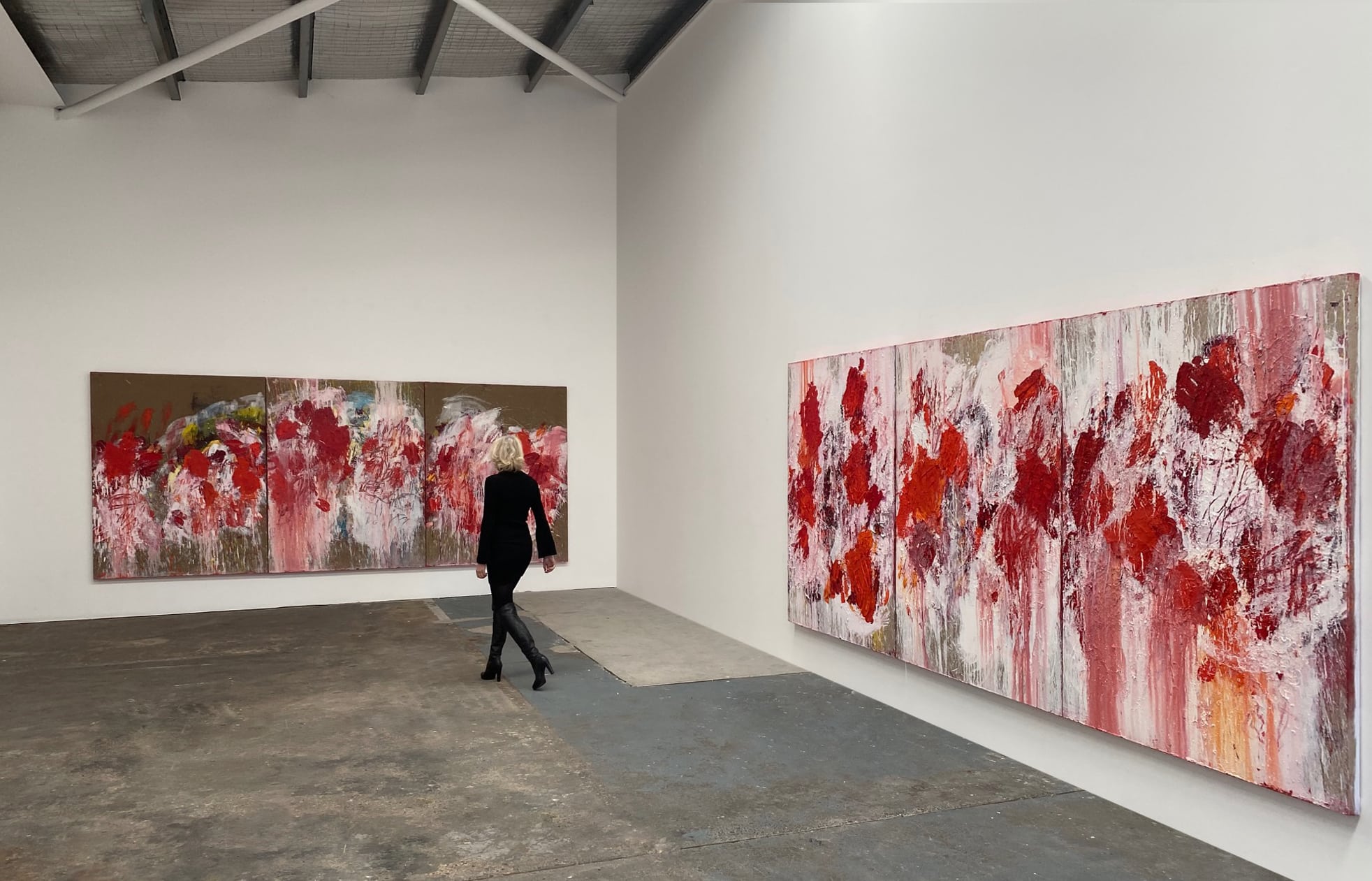 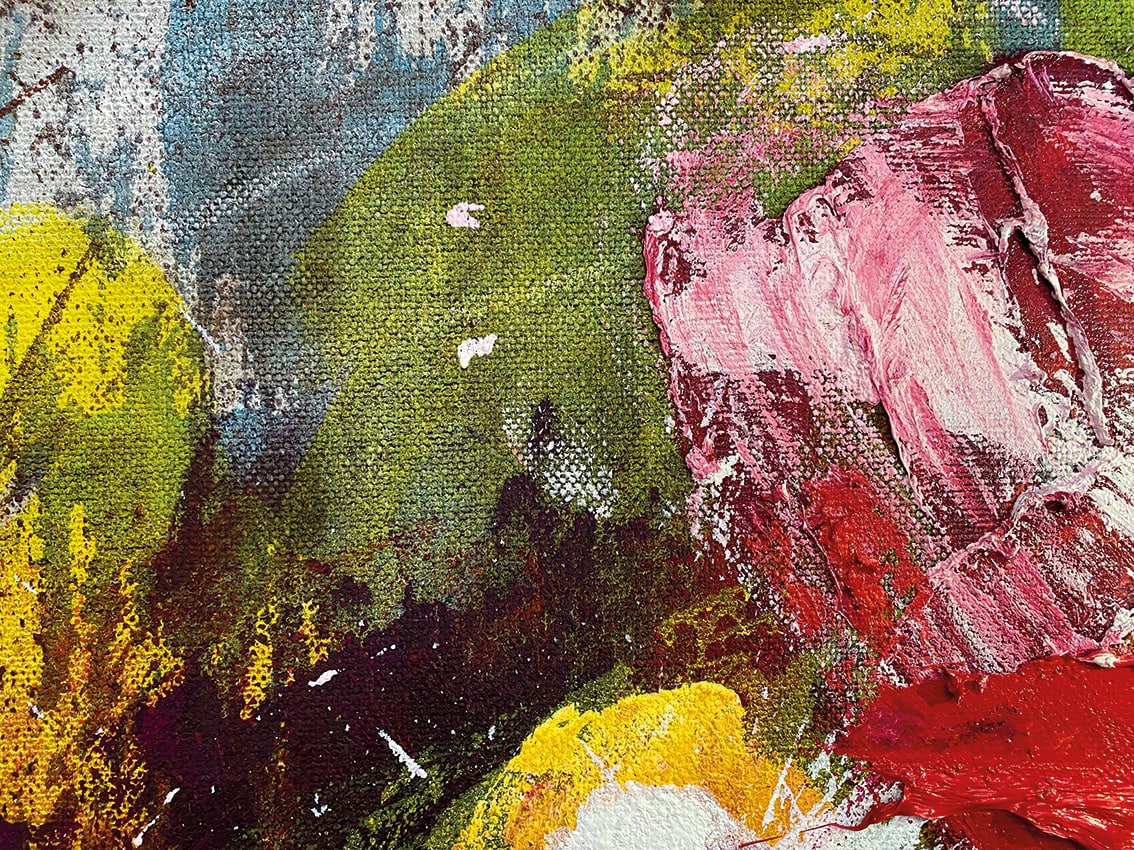 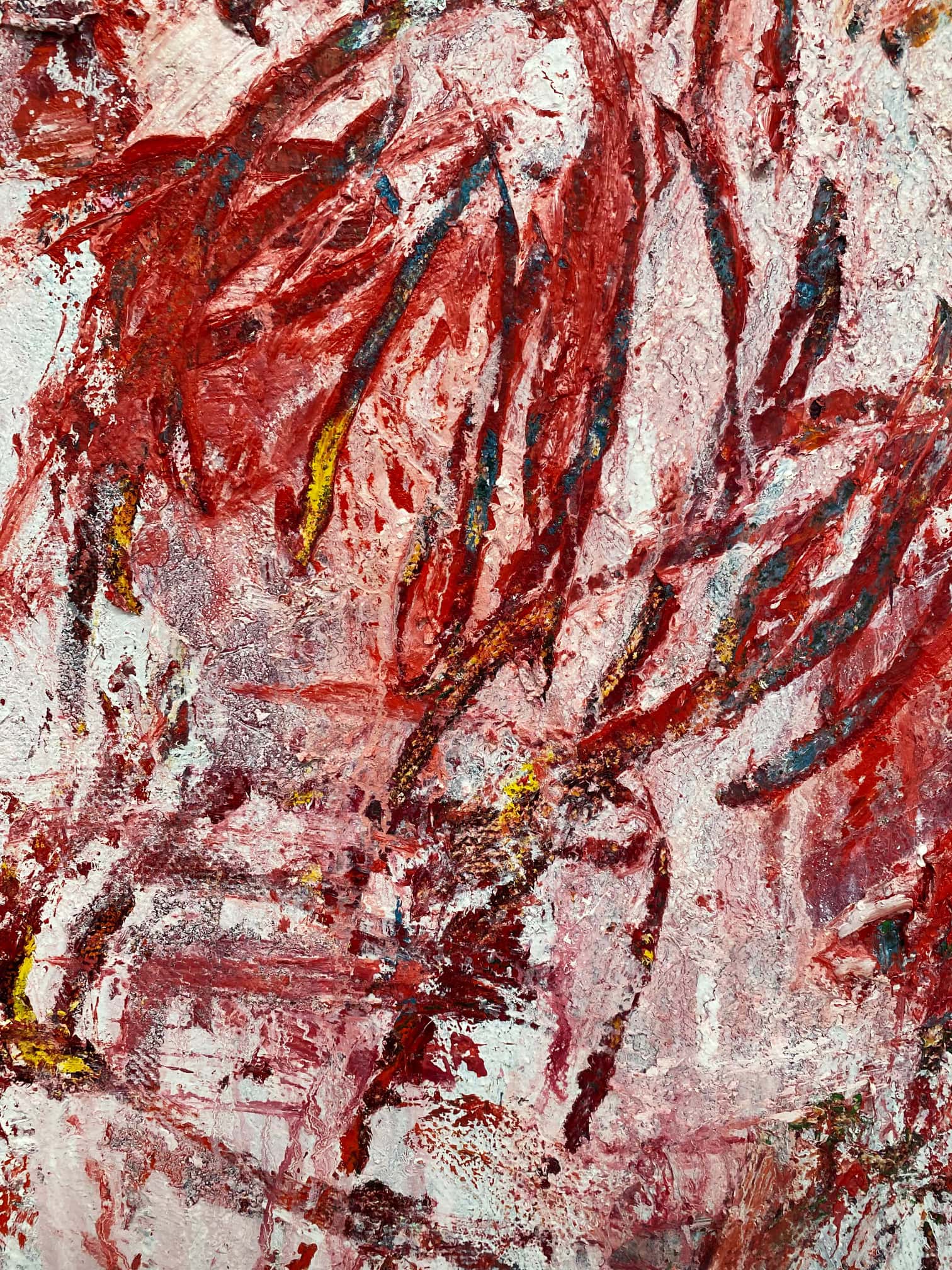 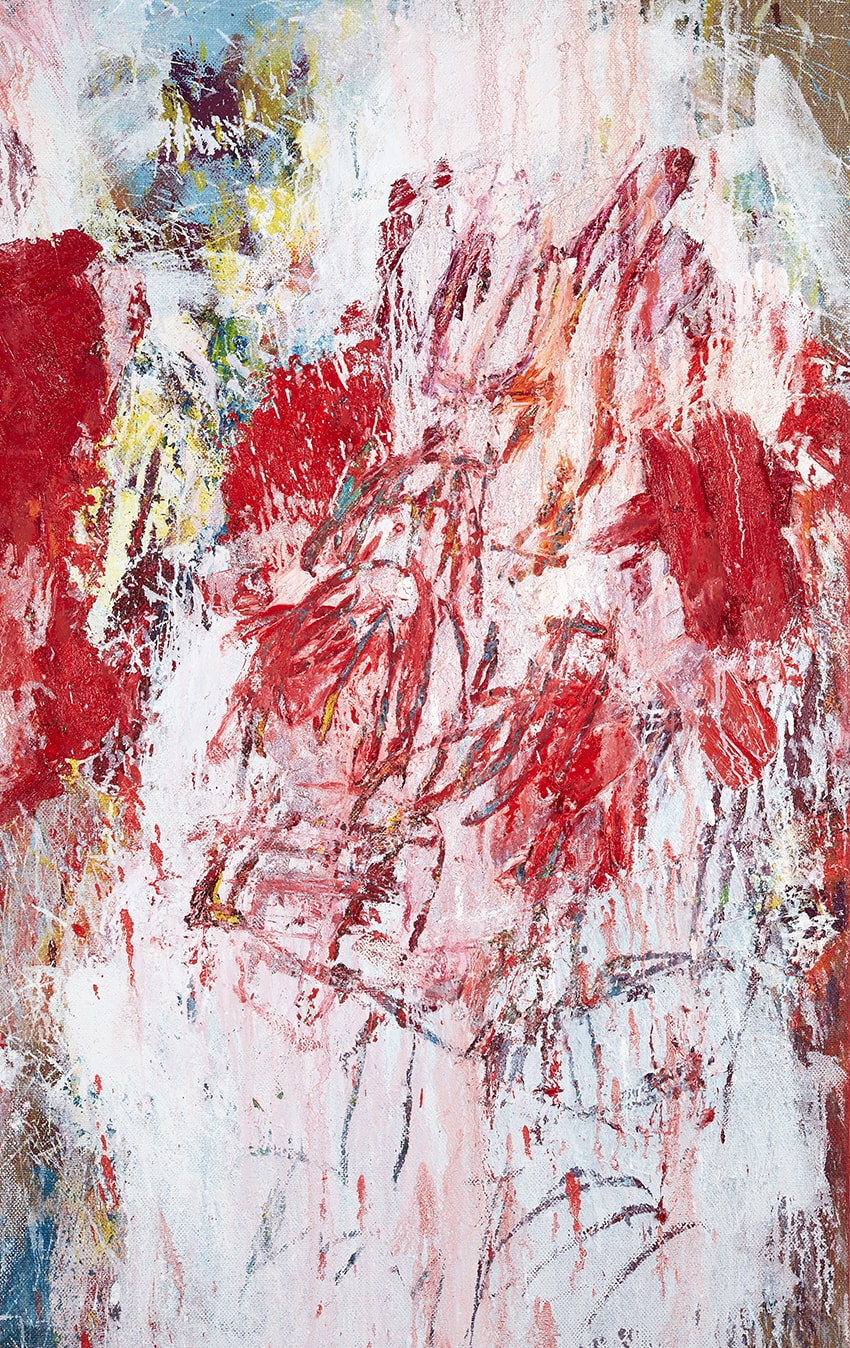 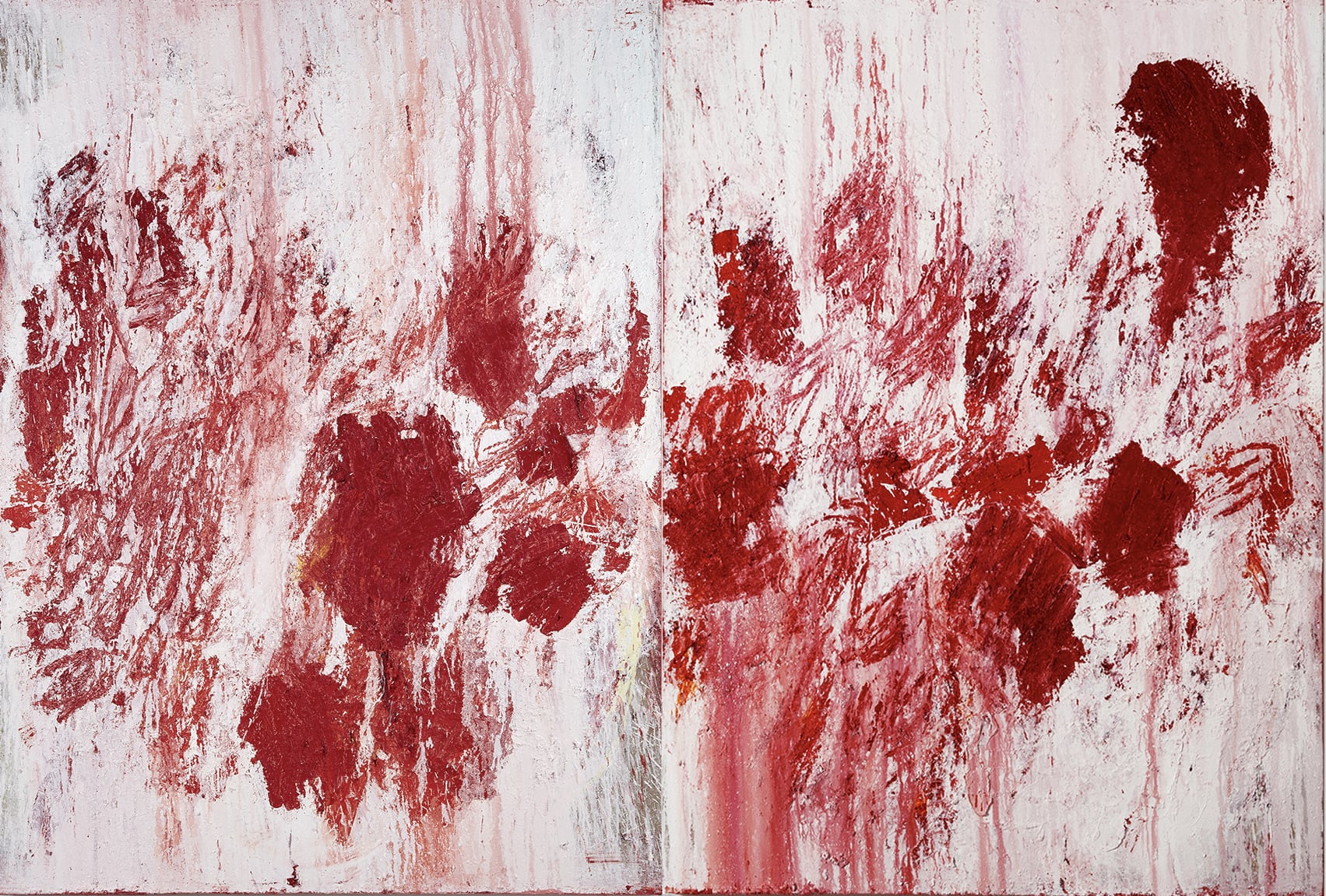 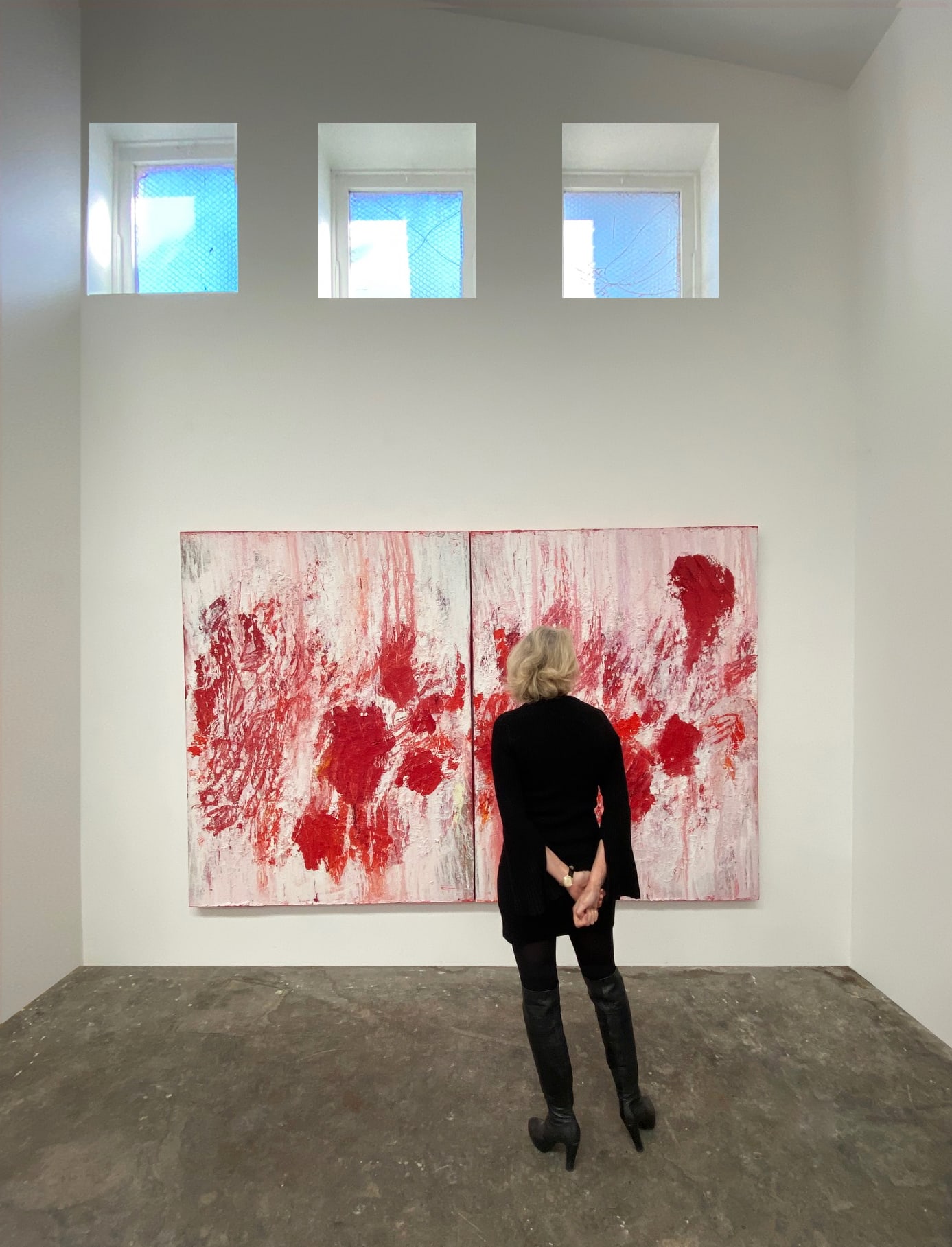 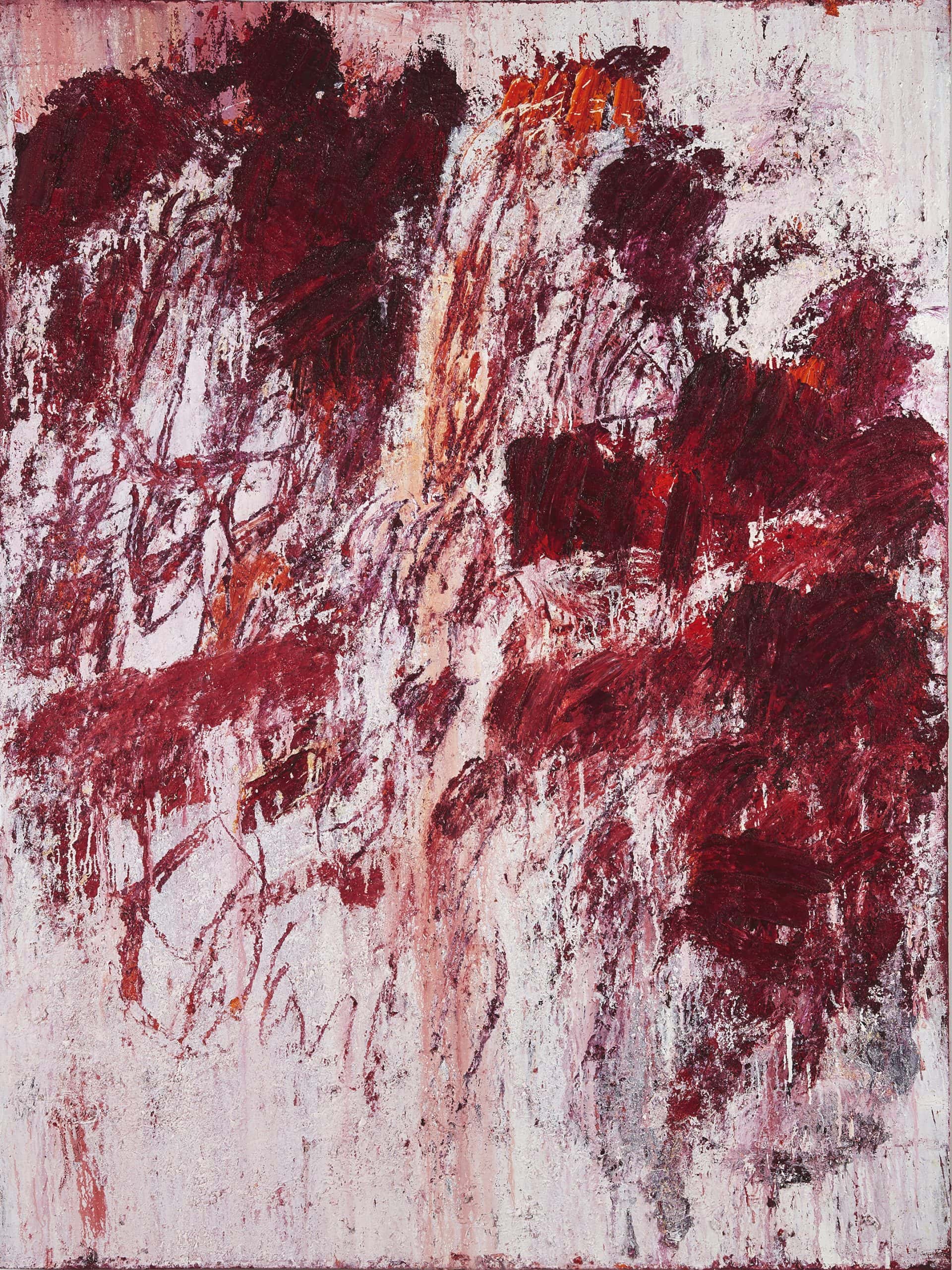 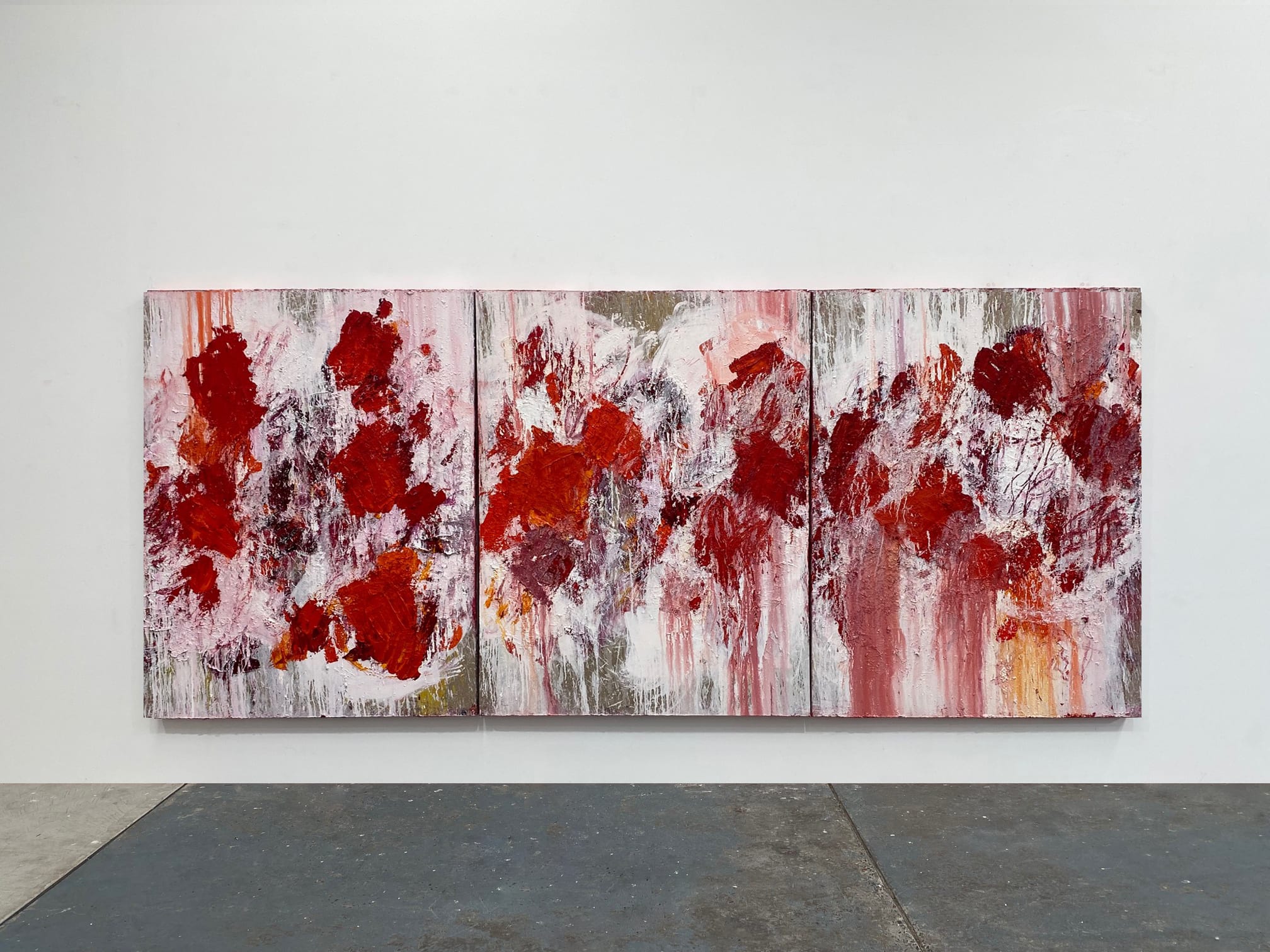 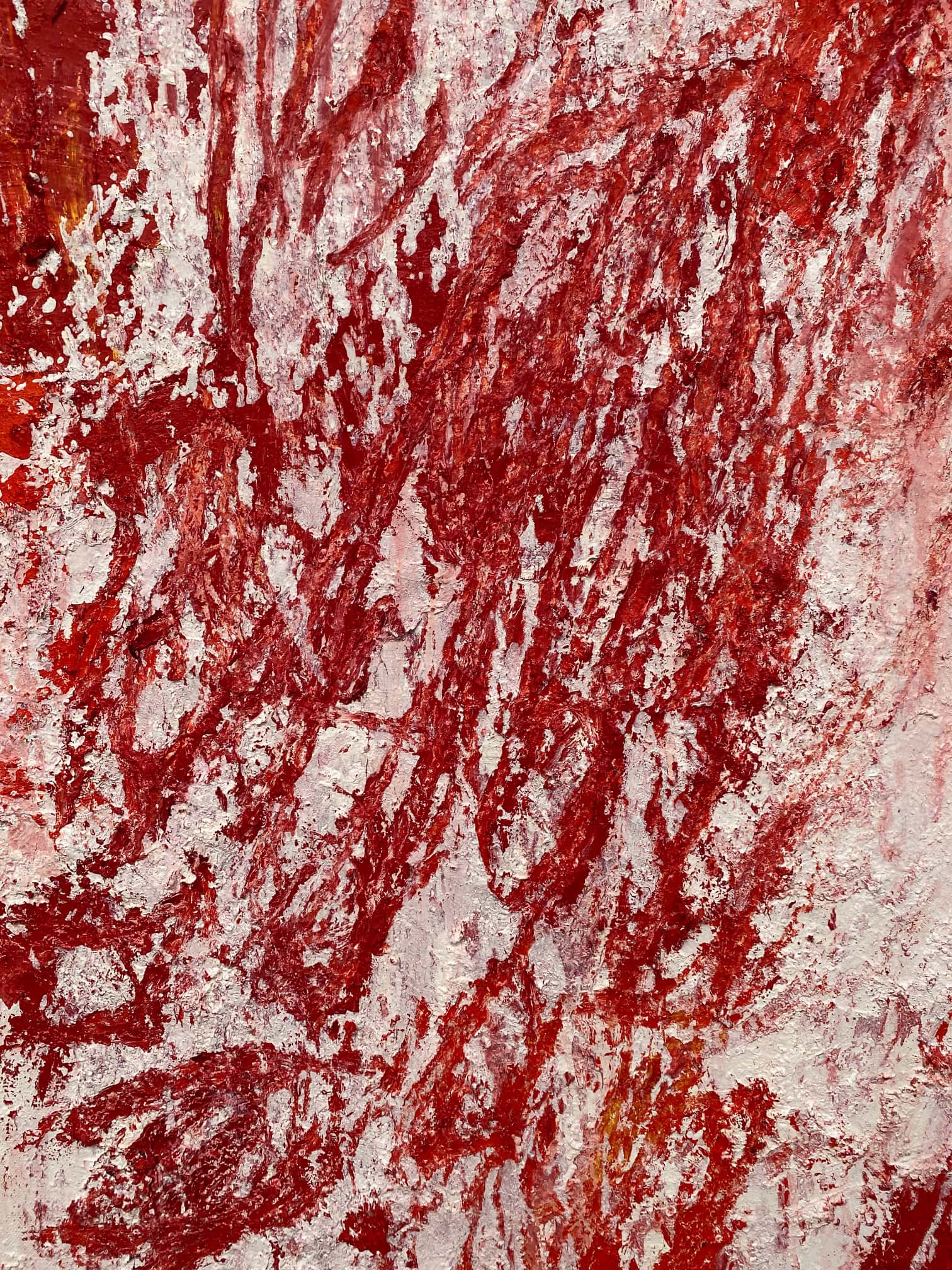